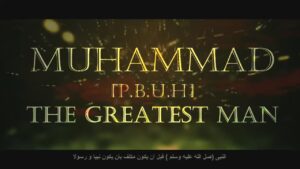 Prophet Muhammad (Peace of Allah be upon him) was born in Saudi Arabia in the city of Mekkah.

He lived with unbelievers who worshipped idols,  he was faithful and trustworthy.

In history, he is the Best man in the world. At the age of 40, Allah chose him to be his prophet.

He professed in one of his Hadiths, ‘ God has sent me to perfect good manners and to do good deeds”

Prophet Muhammad was the express image of the attributes of Allah,

I n this article, we will explore the top reasons why he is the best man in the world!

It is a myth that Islam is a religion that encourages violence. The prophet was a lover of peace. Throughout his life, he desired people to live in harmony and often settles conflicts among people. In the conquest of Makkah, the prophet encouraged his partners not to seek revenge from anyone but to forgive

He lived his life everyday for Allah, he did every thing for His sake.

when he was preaching in the valley of taif, some people led children to throw stones at him, he had to escape the scene and begged Allah to forgive them. This shows the height of his selflessness and how his ultimate goal was to please Allah throughout his life and spread His message

He was a person of rich and rare morals and values. His companions testified that the prophet did not swear at anyone nor did he curse anyone, he showed good manners to men, women and even children. He practised good morals and preached it to people

It is a myth that Islam is a religion that oppresses women, the prophet had the rights and interests of women in mind, he gave preference to raising female children, he took care of all his wives by feeding them with his own hand.  He said in one of his hadiths that “Whoever (brings up) two girls till they come of age, will be in the next world along with me, like my two fingers joining each other”

Prophet Muhammad was generous, he was extremely generous in all seasons and even in Ramadan, he taught Muslims to have the best manners, in Islam, generosity is an investment into the future as it can pave way for paradise

The prophet has been a man of integrity and trust, a visioned leader, a man of great courage in the face of threatening situations, he led by example and he is a role model to men, women and kids, this has qualified him as the best man in the world!

Click here to read more Islamic lessons online, you will have an insightful read